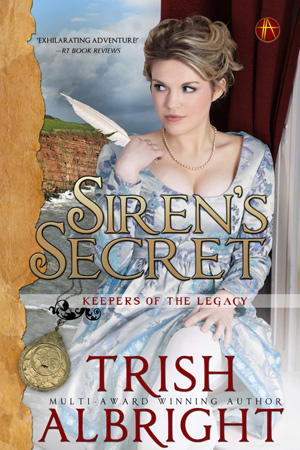 Lady Olivia Yates had an accomplished mind, a scholarly vocabulary, and thanks to her father, a fascination and expertise in all things Egyptian. The one thing she didn’t have was any experience outside the walls of London. Then her father is kidnapped, a colleague is murdered, and Olivia finds herself in the arms of the one man who can help her save the day.

Captain Samuel Stafford was instantly intrigued by the silver-eyed, lady professor. She was driven, clever, and surprisingly persuasive – otherwise he’d never be in this kind of danger! From fighting off pirates to hunting for treasure, Samuel realizes there is no place he wouldn’t go to win the heart of one remarkable woman, and finally discover the Siren’s Secret.

Albright cements her place as an action adventure/romance writer with her second roller-coaster ride of a story when an American shipping magnate and a British Egyptologist match wits and wiles in a race to decode an ancient prophecy. The fun begins on page one and continues to the very satisfying end. —Romantic Times BOOKreviews

“For a summertime book at the beach, what could be better than a delightful, romantic, swashbuckling escapade…This fast-paced, exciting high seas adventure is sure to keep you as riveted as it did me.” —Joyce Anne McLaughlin, Publishers Weekly’s Beyond Her Book Blog

Lady Olivia Katharine Hastings Yates, known for her exemplary standards, excellent taste, and exceptional mind, was about to become a thief.

She stared at the artifact before her. Her fingertips tingled, her senses heightened, and her life was about to change forever.

But what choice was there?

She picked up the ancient Egyptian funerary cone, instantly disgusted.

“They really should improve the security here.” This was the British Museum. Home to countless priceless artifacts! One less artifact now.

Olivia ignored the fact that her first bit of thieving left very little remorse. It was actually a bit thrilling, if she was honest. And surprisingly easy. Completely wrong, but most exciting, all in all. She sighed, relieved she’d been able to succeed. Her jaw relaxed a moment.

One step closer to saving her father.

A chilling waft of air struck her, and Olivia realized a window was open somewhere. That could not be safe either. She would be sure to tell Grayson they needed to check their security.

She glanced around Grayson’s dark research room, lifting her lamp past the tables of books and artifacts being studied. The windows appeared closed.

Olivia brushed away any worries, her attention returning to the artifact.

She lifted it carefully, weighing. Solid red granite. Heavier than expected. Another thrill went through her—this one entirely academic. She was holding an item more than two thousand years old. She reverently traced the ancient hieroglyphics engraved on the rounded end, recognizing instantly many words she had already translated, and studying new ones, her mind racing with excitement, a strange familiarity and understanding rushing her.

Turning it over, she observed how the stone narrowed into the shape of a five-pointed star on the other end—as if designed for a secondary purpose, perhaps to hold the marker in place.

“Unusual,” she murmured. She didn’t recognize the strange symbol chiseled inside the star either. It didn’t look Egyptian, but according to the writing, this funerary cone marked the resting place of a librarian at the Great Library of Alexandria. She touched the symbol.

Her head spun, and she put the ancient object down for safety.

Odd. The excitement, no doubt.

Olivia took a breath. It was time to go. She needed to walk out of the room, smile pleasantly, compliment Grayson and the other hosts, then leave the fund-raising event as quickly as possible.

Her eyes darted around the room for anything else of value she should snatch while she had the chance. If she was joining the profession, she intended to be good at it.

On the desk, not far from where the artifact had been, was a paper. She recognized Lord Grayson’s exacting script.
He had noted all the symbols of the funerary cone, with special care to possible meanings underneath, but was completely wrong in his theory.

There was also an inscription included from where the stone had been acquired. The hieroglyphics struck her with sudden clarity. What you seek, you already have.

Olivia’s head spun again. She braced herself against the table.

Touching the ancient stone, Olivia was more certain than ever that she had the code for translating hieroglyphics correct. Only no one believed her.

Why would they? She had not attended Eton, Oxford, or any institution of note. After all, she was a woman. Her entire education had been achieved through private tutors and her father’s library. Fortunately, her father had one of the largest personal libraries in London. But, oh, to one day speak at the very institutions she was barred from and share her knowledge. To exchange ideas with other great minds. She knew it was improbable, but she dreamed…someday.

Aside from the stealing part. That could become an issue.
Her father’s colleague in Egypt had sent this to the British Museum in hope that Grayson and others could decipher the notable Alexandrian’s text.

She folded the paper and shoved it deep into the pocket of her gown. A creaking sound at the far end of the room sent a shot of ice down her arms. She whirled and stared into blackness.

Bookcases settling, no doubt, but a reminder that she needed to make her departure.

She tucked the Egyptian relic into the crook of her elbow, concealed it with her thick cloak, and pressed it snug against her body. Next she covered the wick of the lamp until darkness enveloped her, save for the moonlight through the window, and made for the door.

That’s when the creak turned to a scuttle. A fast scuttle. Little hairs on the back of her neck prickled. She turned defensively as a large shadow moved across the room.

She rushed toward the light illuminating the crack under the door.

Something caught at her throat and pulled her backward, choking. The granite cone slipped from her grasp and fell with a muffled thud before hitting the wood floor. A man yelped. She realized the stone must have landed strategically, giving her a moment’s reprieve. She turned and swung wildly, furiously, flinching when her weak fist made contact with something that felt like a chin.

“Bastard!” she spat, furious at her injured hand.

He ripped her cloak from her tangled grasp and threw it over her head, causing not just utter darkness, but suffocating utter darkness. Olivia struggled in earnest, crying out for help, her voice effectively muffled in velvet and mink, her head getting hot, her thoughts becoming fuzzy, her hair ruined for sure, but worse—she was being carried toward the windows.

She should have known stealing wouldn’t be this easy. Despite all her planning, there were things in the world of thieving she hadn’t taken into account.