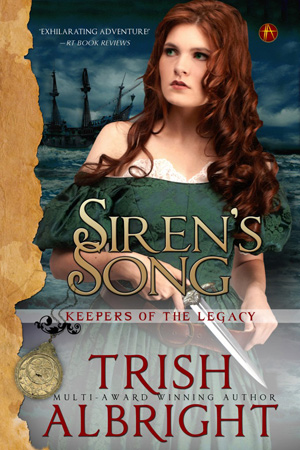 Knife-wielding shipping heiress, Alexandra Stafford, would rather face down a crew of bloodthirsty pirates than face off with the prim and proper English gentry. Haunted by a powerful prophecy and stalked by an obsessed killer, Alex is a woman on a mission, her only focus to protect her family and finally stop the vicious slave-trader who murdered her parents years ago…that is until the biggest obstacle of her life walks in and she must choose between exacting her revenge or reaching out to a love she never expected.

The duke of Worthington returned to England for a life of peace and quiet, never expecting that the woman of his dreams would lead him on the adventure of a lifetime. When danger escalates, Worthington must prove again and again that there is nothing he won’t do for the love of one captivating woman, and he risks it all to surrender to the…Siren’s Song.

“Albright debuts with an adventure romance that takes the high seas and readers into the realm of pirates, prophecies and passion. The plot twists, paranormal overtones, well-crafted characters and exhilarating adventures make for a whirlwind, nonstop read.” —Romantic Times BOOKreviews

“For a summertime book at the beach, what could be better than a delightful, romantic, swashbuckling escapade…This fast-paced, exciting high seas adventure is sure to keep you as riveted as it did me.” —Joyce Anne McLaughlin, Publishers Weekly’s Beyond Her Book Blog

“There is never a dull moment in this action-filled novel. Although it is Ms. Albright’s first book, she writes like a veteran. Don’t miss Siren’s Song for an exciting reading experience.” —Romance Reviews Today

Being a practical sort, she preferred being a living legend.

An Arabian guard yanked her thick, long braid, demanding attention she refused to give. Undeterred, he hooked her bound arms, currently tied from behind, and dragged sideways towards the auction block. It was uncomfortable, not to mention, the height of rudeness.

Stumbling, but stubborn to the end, Alexandra Stafford levered bare feet against the hardwood steps and pressed backward against the guard with all her strength, her body nearly horizontal, stretched open to the crowd of attentive buyers.

Another figure sauntered into her peripheral vision and the face of her kidnapper appeared as he bent down, nonchalantly, to observe her distress. His hand lifted to halt the guard. Tilting his sun-darkened face parallel to hers, he frowned with a disingenuous expression of worry, shaking his head over her situation. The sour smell of tobacco emanated from his breath and skin, and Alex grimaced in disgust, before unleashing her fury.

“I swear if you do this, my family will hunt you down, cut you limb from limb, gut you like a pig, and feed you to the sharks, you miserable, sonofa—.”

She cut off, choking, as Reginald Paxton blew smoke in her face. Her body convulsed with hacking coughs, and the guard took advantage to yank her back into standing position. Alex kicked out at Paxton with rage, her bare feet doing little damage to the parts she could reach. He laughed. It infuriated her further to think he was laughing at her puny efforts. Once freed, she would kill him. With any luck, a few different ways.

“Tell me where the map is, and I can make this all go away, Miss Stafford.”

“I told you.” The guard painfully tightened his grip on her. “I don’t know anything—” She slammed her heel down on the guard’s foot. “—About some stupid map.”

The guard whacked her in the side of the head, causing her brain to rattle.

Alex faked a recovery she didn’t feel, raised her head, and smiled.

Incensed, Paxton waved for the man to proceed.

“No! You bastard! I’m an American. I’m a free woman,” Alex screamed, fighting violently as she was forced toward the platform. Her efforts were so fierce another guard came to assist.

“Someone help me!” she begged, searching desperately for a sympathetic face or word from the crowd. There were none. Only the foreign sounds of Arabic. She understood enough to heighten her fear, as she was dragged onto the small stage and held in place.

In her short life she’d had many roles—daughter, heiress, sea captain, and now she thought bleakly, slave. Boston was a lifetime away and she was at the wrong end of a sale gone bad. Very bad. Fear no longer prickled the hairs at the back of her neck, but suffocated the life from her with dizzying force. She swore to kill Paxton for this—if her father didn’t get to him first.

Forcing self-pity aside, she took stock of escape options.

They appeared dismal at best.

To her left, the door she entered, was protected by a long hallway of armed guards. Paxton stood aside waiting to collect his earnings for the night. She had not been his only sale, but the other woman had appeared blessedly incoherent. Forward, she faced the eyes of a hundred dark predators, staring, eager for conquest. She couldn’t breathe without tasting their steamy, musky sweat. Finally, to her right, stairs to a place she didn’t want to know about. The place they took the slaves. Her stomach wrenched with dread.

She woke up from her temporary daze and leapt. Unfortunately, the arm encircling her neck caught and tightened. Turning her head sideways inside his grip, Alex bit hard into the salty, hairy flesh. Disgusting, but effective.
A remarkably high-pitched yelp rewarded her efforts before the air at her throat was cut off. Her vision blurred, and her body trembled. The guard gave an inch. She hissed in a sharp breath. The second she regained her focus and footing she spat, “Obviously, your mother didn’t teach you any manners, you stinking, filthy, brainless bastard.”
She croaked more than cursed, but the slurs felt good nonetheless.

Alex regretted the outburst immediately when a murmur of curiosity, expectation, then appreciation, spread across the room. As if her struggle excited them. Her eyes burned with terror. God help her. They were all animals.
Joshua Leigh looked up at the commotion. He’d been having an exceptional night out with his friends—until now. Right now, he felt sick. His cohorts thought to impress him with admittance to one of the special markets—a Moroccan slave auction. To the buyers, a very civil affair. To the slaves, the beginning of a nightmare.

Joshua raked a hand through his hair, yearning for escape. They had missed most of “the evening’s highlights,” and thankfully the experience was nearly over.

He surveyed the small square room, crammed with lustful buyers, and suffused in cigar smoke. Although he was in the back, his height gave him a clear view of the makeshift auction block and the buyers eager to make a purchase. They no doubt had experienced every known pleasure and out of boredom sought more. There was no thought of moral consequences. When you were this rich you could control the consequences.

A howl from the barrel-chested guard escorting the current captive caught his attention. The girl choked on a scream, her long braid coming undone, and spilling rich, auburn tresses over her shoulders. A buzz began in the room. Joshua tensed, watching the girl struggle in vain against the enormous creature twice her size.

Witnessing her vulnerability, he was forced to think of his own. Of everything he had worked and sweat for in the last four years. He was making a life for himself. An honest one. One that had nothing to do with his bastard father, and nothing to do with this. His current shipment would put him in the black. If he delivered it on time.

Why then, would the thought of losing it all even come into consideration?