The Time Keeper (a novella) 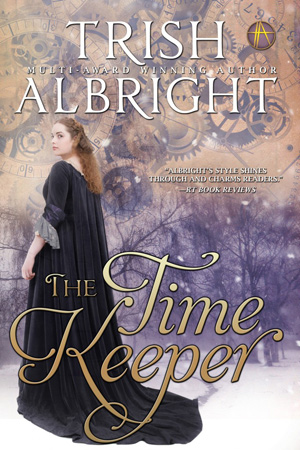 A holiday love story for everyone…

Avery Hilfington was talented, tenacious, and spent a lot of time, thinking about time. She’d lost her father at sea, and was determined to solve the problem of longitude before she lost the only other man she loved – a man who wanted nothing to do with her anymore, and a man that she swore had broken her heart for the last time.

Sir Luc Rees, Lieutenant in the Royal Navy, had one goal – to win back the heart of his best childhood friend. He had turned away from her for four years, and now he had to make her understand why. Of course between her sleuthing for answers and chasing down thieves, the opportunities for courting were slim. With winter holidays fast approaching, he wished for one thing only – the gift of time to win her love.

Avery held her treasured timepiece up to the last remnants of light. Three fifty-nine. In two minutes sunlight would be gone entirely.

In one minute, the game would begin.

Or should she say, continue?

Time played an important role in Avery Hilfington’s life. Thirteen years since her father had perished, along with sixteen hundred others in the Royal Navy; six years since Parliament had passed the Longitude Act; four years since…

She lifted the gold chain and slipped the watch under her shirt, secure against her heart, then shivered. The delicate instrument had once comforted her. Now the cold metal merely reminded her that temperatures had dropped steadily all week, winter storms would pick up at sea, and thousands of men would once again be in danger.

She closed her eyes against the memory of that one man—the one who had been her friend and companion for the duration of her life.

The bell tower made its first chime, beginning to mark the evening hour.

For four years he had carefully avoided seeing her. Four years for her to come to terms with her feelings. Four years in which she’d focused solely on solving the problem of longitude.

At four o’clock Dr. Llewellyn would begin evening rounds, then dinner would be served.
Avery slid behind heavy curtains that covered the windows in the hallway, her footsteps soft on the chilled tile, her heart pounding loudly in anticipation of her actions. She reminded herself this was necessary, and reasonably justified. She wasn’t breaking into anyone’s office who had not already broken into her home.

She recounted milestones in an effort to calm herself and rationalize her actions.

Four years since Luc had gone to sea; one year since Professor Halley had become Astronomer Royal; six months since she had completed design on the sea watch; one week since the watch had been stolen. Forty-eight hours since she’d discovered the culprit. Three hours since she’d stolen a set of keys. One minute before she would recover what was hers.

A knock at the door alerted her. Her recent reconnaissance paid off as the evening nurse fetched the doctor for end of day rounds.

Avery tucked her toes behind the heavy curtain and pressed against the frozen glass, hoping the thick folds looked perfectly normal to a passerby.

She heard two sets of footsteps coming closer, the momentum of their gait ruffling the material concealing her. She counted down the ten steps before they would turn the corner. At ten, she darted from her hiding place and put her plan into action.

Her hands trembled slightly as she fumbled to find the right key. An echo of new, heavier footfalls sounded from around the corner.

The key didn’t fit. “Damn.” She tried the next one.

The footsteps became louder, and despite all her planning, her hands lacked their usual dexterity. She inserted the last key. Click. Avery checked that no one watched as she slipped inside the doctor’s suite.

Once inside, she inhaled deeply and gently closed the door, locking it behind her. She waited until the footsteps passed before releasing her breath.

Having recovered her composure, she put her basket of goods on a chair by the coat rack and looked about. A door led to what she guessed was an examination room. In the main room, a full-length human skeleton hung in one corner followed by a wall of medical books. She walked past the form, poking the ribs causing the bones to dangle spookily, an arm reaching out to her.

“Sorry, old fellow. Not here to rescue you.”

A large desk was placed in the middle of the room, but it was the table behind the powerful desk that got her attention. Here were items of science and astronomy: a small scope, a globe, a quadrant, an old mariner’s astrolabe, and a volume of the late Flamsteed’s astronomical observations open to notations on the December sky. In the center of it all was a velvet cloth, spread approximately four feet wide. The contents underneath it were concealed by another velvet cloth.

Avery’s hand shook as she ascertained the shape was not of her timepiece. She had an instant premonition this would not end well. Carefully, she removed the velvet—only to suffer paralyzing shock.

Avery did not know an occasion when she wasn’t consumed with time. It wasn’t a particularly unusual obsession, at least not in Greenwich. Everyone in the town prayed for a solution to longitude, and in the six years since the Longitude Act had passed with the reward of twenty thousand pounds to whomever found the solution, Greenwich had seen its share of kooks, schemes and scams. For Avery, it wasn’t about the money. It was about life. Human life. She didn’t care that the solution would advance British imperialism, or help fill the coffers of the king. She simply wanted their brave seamen to have a fighting chance at returning home. With better navigation, the accident that had taken her father away could have been prevented.

Time did not stand still, as most people would have said. No. Time was in pieces, spread out in parts all over the villain’s desk. Horror burned through her chest.

She could not think about the future. She needed to deal with this moment. Why would Dr. Llewellyn take it apart?
She quickly surveyed the scene for missing elements, and suddenly it was clear. The jeweled parts were gone. They were small, crafted to prevent friction between moving parts, but certainly held their own intrinsic value. Her stomach cramped as she mentally calculated the work ahead…and the cost.

Then there was the issue of finding a watchmaker skilled enough to help her. Mr. Gerrit had been one-of-kind. Not just an artisan, but a man willing to listen to her ideas about how to make a clock seaworthy. Only, he’d returned to Holland to take care of his parents.

She clenched her fists and released them with a determined breath. Rather than speculate if there was another man willing to work with a female inventor of no means, she must deal with what she had. Llewellyn’s mess.
She tried to put herself in his shoes. He must have taken notes. Did he hope to discover some great secret? She opened drawers around the workspace and quickly found them—drawings and diagrams he’d made while ruthlessly dissecting her small machine and methodically laying out the remains.

With great reluctance, she folded the velvet into the shape of a pouch, the parts of her timepiece gathered roughly inside. She ripped a length of material from her underskirt, cinched the velvet closed, then shoved it into her father’s old leather bag along with the diagrams. She tightened her belt over the strap so it was snug against her body, then pulled on cloak, and lifted the hood over her head.

Avery picked up her basket and exited. Triumph was nearly hers.

Back in the hall she re-locked the door as two men rounded the corner. She jumped guiltily, then did her best to feign nonchalance. After all, they had no reason to suspect her of anything. To them, she would appear a lone widow bringing a basket of food to the good doctor.

She counted the steps that would take her past them. Ten, nine…

They stared at her.

She risked a covert glance while pretending to fuss with her basket. Something wasn’t quite right. One wore the boots of a stableman, the other the neat and frugal garb of shopkeeper. Definitely not patients, not hospital workers. Visitors?

“Good eve, gentlemen.” She imitated the accent of barkers down at the wharf. “Just a’leaving some biscuits an’ Christmas goodies for the doctor.”

Five more steps to the corner. She made the turn while checking on them. They stopped in front of the doctor’s door and knocked.

Then suddenly one of the men turned back. “Hey, I know you!”

Avery thought it was quite likely they did if they were the ones who’d robbed her, but she didn’t intend to wait and find out.

She sprinted for freedom.