Why Not You? 3 Attitudes that Hold You Back

3 Attitudes that Hold You Back

Before I got my first publishing deal, I was attending conferences with zeal and trying to learn everything possible about the craft and business of writing.

At one such conference there was a session you could sign up for, where in a small group, you would read the first ten pages of your manuscript, and an editor who acquired in your genre would give you notes.

I really wanted to throw up. The only comfort was that all the other writers were equally green – except for the one who went to drama school and couldn’t wait to perform her masterpiece. You know the one.

We went alphabetically by title, so I was first. I read my ten pages like I practiced, trying to breath and represent the pacing as I intended it. When I was done, the editor looked at me, nodding silently. 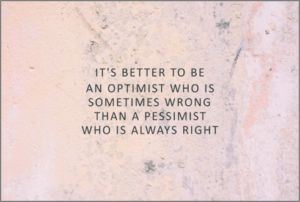 She was nice and gave me only positive comments. Which was a relief since I was pitching her the book the next day during the standard editor and agent appointments.

But then this agent spoke to us more broadly and talked about a recent study on the odds of getting published. You were more likely to be struck by lightning – twice – than you were to be published.

While there was a collective gasp of horror that the odds were against us all, all I could think was, “What idiot gets struck by lightning twice?” (Not the point of her story.)

“Yes, why not you? Why not all of you? You are constantly told how hard it is, but it’s only about doing the work. There’s no reason you shouldn’t get published.”

It was actually really inspiring after I got past the lightning.

But it also made me and other writers there realize we hold onto a lot of attitudes that hold us back. Instead of the expectation of success, we let doubt and future disaster eat away at us.

Here are three attitudes worth purging from your psyche that might be holding you back.

It’s simply not true. The opportunity (at least in America), is available for everyone. Don’t isolate yourself thinking you have to make it on your own, or you’ll never make it. It’s more true that the rising tide lifts all ships. I was in a critique group before I was published and we all helped each other. And we all got published. There’s nothing better than succeeding together.

And there’s nothing worse than seeing a friend not succeed because she won’t listen and let go of the things holding her back. Don’t be in that group. You’ll drown.

The great people are just born to be great. It’s already in their genes, their heritage, their family wealth, their top education, their superstar network, etc.

You have none of that, therefore it’s a sign you’re not special. So why should you be successful, or deserving?

Really? Who the hell are you to decide you are not special? If you were born, you are special. So let go of your life baggage, family baggage, grade school baggage, analysis baggage, etc. – and just accept it. You’re special. If you don’t believe me, go ask Oprah. She is proof that a humble beginning has nothing to do with who you can become.

Now that you know this, embrace it and expect to succeed—over and over again.

There’s never a right time to go for it, to pursue your dream. There is only right now. Few things happen overnight, so you decide. You can start now or twenty years from now. Your call.

I make it sound like it’s easy to start with nothing, or quit a job, or switch paths. It’s not. I have the same responsibilities every other daughter, mother, wife and friend has. I had to make provisions, I had to make choices, I had to say no to some things so I could say yes to the things I really wanted. But it’s not brain surgery. If there is a dream in your heart, you are meant to have it. I truly believe that (unless your dreams are evil). But if there’s something you feel you are meant to do then go plot, plan, dream and scheme. Don’t wait because you have excuses.

The net will appear and it will bounce you in the direction you need to go next.

Tricia Cerrone is an author, designer, and entrepreneur with a focus on mentoring young adults and creating stories that inspire hope. Check out her multi-award winning series The Black Swan Files