Fear is a Bully

Fear is a Bully

Sometimes we don’t recognize that nagging voice in our heads until after an opportunity has passed. And then we kick ourselves for falling for the bully that taunts us relentlessly and never gets tired!

Fear is a Bully. And bullies show up saying a lot of useless things. 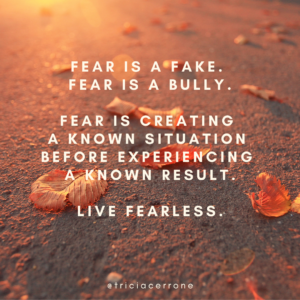 Only action can combat fear, so act. It’s okay if what you do is not perfect. It might even turn out disastrous! I’ve done plenty of disastrous. But, you can always take another action right after that, learn, pivot, try again, speak again, figure out how to say or do something differently. Punch the bully in the face, shut the trap, and rewire your mind.

But don’t be bullied.